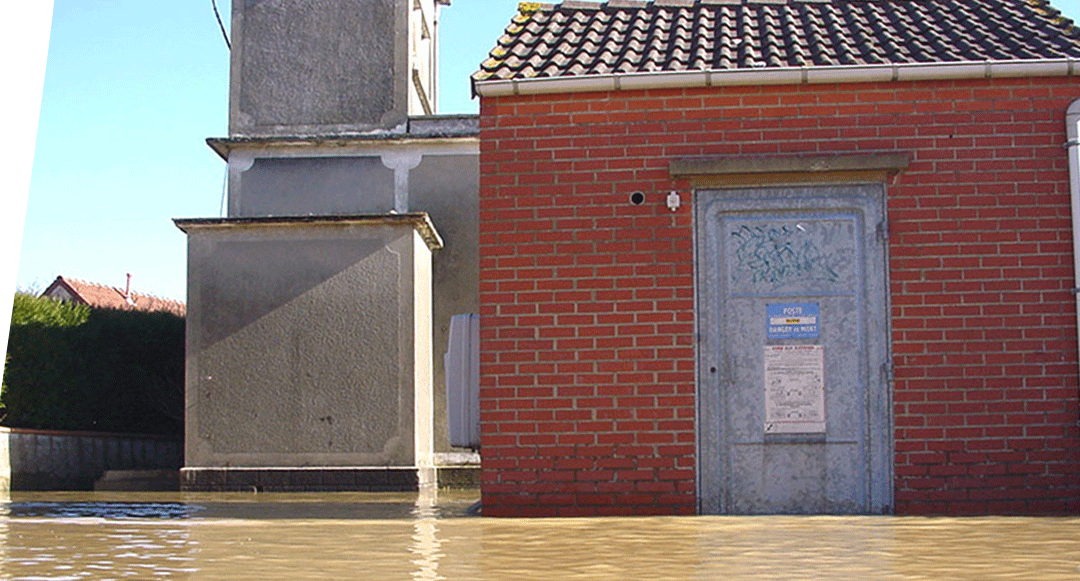 In 2016, violent floods hit French territory. Following this episode, ENEDIS, the distribution managing company of the French electricity network (38,000 employees, 37 million customers, 14 billion € of turnover in 2019) committed to the deployment of connected sensors to deal with possible flooding of public electricity installations, due to river floods, thunderstorms or water table infiltration.

Thanks to our expertise in the design of industrial connected objects as well as our know-how in the deployment of global IoT solutions, we were able to support ENEDIS in its flood sensor project called DINO (DINO is the ENEDIS customer name of our AQUAWATCH sensor).

| The collaboration between ENEDIS and STIMIO, an industrial IoT specialised company, has been very fruitful thanks to STIMIO’s IoT expertise, its understanding of business challenges, the responsiveness of its teams and its ability to produce quality devices in volume. Read the full testimonial.

MV/LV substations are electricity installations ensuring transformation between the medium voltage network (MV) and the low voltage network (LV). There are more than 800,000 in the country. Many of them are located in flood-prone areas identified as “Significant Flood Risk Territory”, areas for which the DINO device must be deployed.

The final objective is to ensure that 90% of customers are reconnected in fewer than 5 days.

The DINO connected device is therefore in line with ENEDIS’s will:

The DINO connected sensor is installed in MV/LV substations or in electrical boxes considered “at risk of flooding”. The DINO makes it possible to detect the onset of the flood, to monitor its progress, in particular its intensity and its end.

Water is detected at a first level and then at a second one. Once this second level is reached, the DINO then enters an increased monitoring mode and periodically measures the water level and its rate of rise.

All of these events generate alerts. These alerts and the flood data are sent via a low-power wide-area network (Sigfox/LoRa).

Regarding ENEDIS, these data are sent to the customer’s internal management platform: SmartConnect. Data can also be viewed in a dedicated smartphone application.

These information and alerts can also be made available on STIMVIZ, the device management and visualization platform developed by STIMIO.

Our flood monitoring connected sensor is waterproof (IP68) and is battery powered (5years autonomy). Its design, mechanical and radio, allows it to be installed in the majority of ENEDIS electricity stations, including underground ones.

Responsiveness of intervention, optimization and security of electricity installations

MV/LV transformers are regularly flooded in these risk areas. Without accurate information, it is impossible to know when to turn off and on again the electricity supply. Field technicians are then sent unnecessarily to the field. A too late cut risks depriving an entire agglomeration of electricity.

Thanks to the DINO IoT sensor from STIMIO, our customer ENEDIS can now:

A complete range of connected devices for your infrastructures

STIMIO offers a complete range of IoT devices for monitoring infrastructures, their health and structural integrity.

With our modular and long-distance communication systems, running for years on battery, it is possible to have a real time view of utilities infrastructures, assets health and integrity and thus better plan maintenance to avoid breakdown and failure, especially during weather intense scenarios. 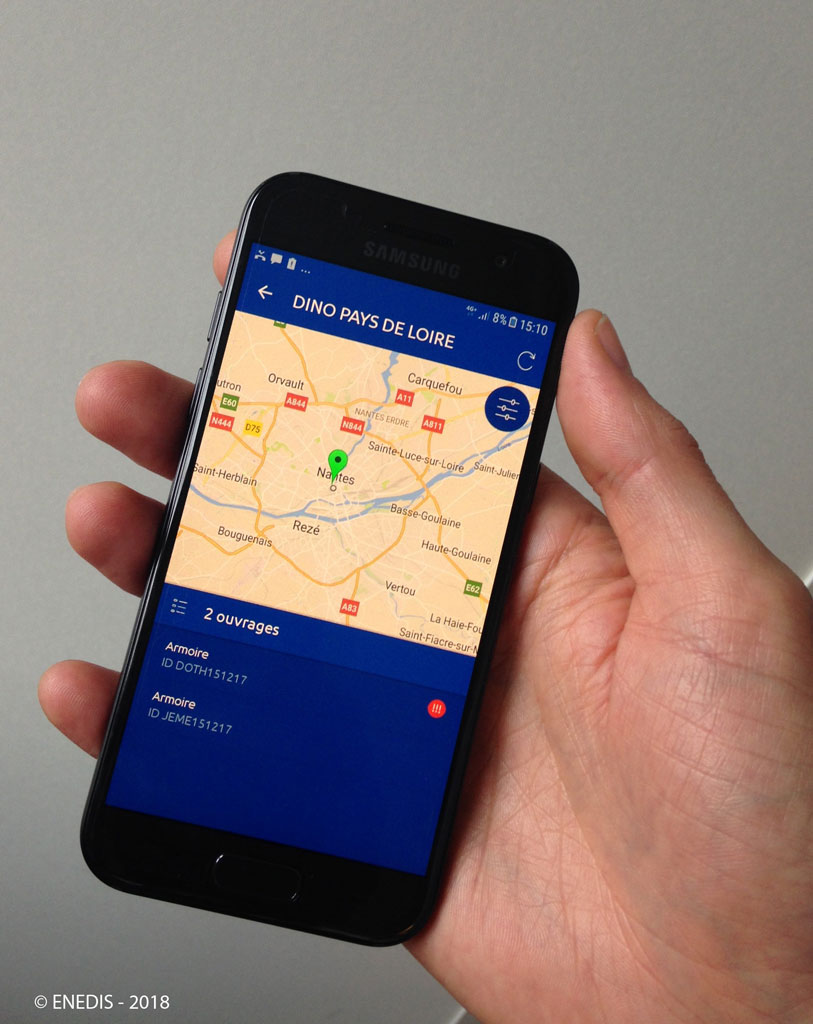 The flooding of electrical substations, in particular MV / LV transformer stations, is a situation regularly encountered by the Regional Offices of ENEDIS.

During a flood, ENEDIS’s mission is to ensure the safety of goods and people with regard to the electrical risk but also the resilience of electrical structures after the water has withdrawn.

This is why ENEDIS performs preventive power cuts as soon as the water reaches a certain level in the MV / LV substation.

Without the accurate information, this requires regular and time-consuming on-field monitoring of water levels in electricity installations.

The idea for the DINO connected sensor came from ENEDIS employees during a national hackathon in 2016 after major floods, particularly in the Paris region and in Normandy, in the Seine basin but also during climatic hazards such as the storm, Xyntia in 2010.

Initially, experiments were carried out in the regions, notably in Poitou-Charentes, using “off-the-shelf” sensors in order to assess the added value of having the data collected by internet-of things devices for the exploitation of electrical networks.

At the end of these conclusive experiments, ENEDIS decided to industrialize this object and, after a call for tenders launched in 2018, entrusted its construction and production to the company STIMIO, with the signing of a 3-years framework agreement for the exclusive supply of DINO flood connected sensors.

Feedbacks from the ENEDIS’ Regional Offices, who tested STIMIO’s prototypes, was very positive in several aspects:

The development period for the hardware and the end-to-end solution has been completed and the DINO connected sensor is in the deployment phase within ENEDIS’ 25 Regional Departments.

The collaboration between ENEDIS and STIMIO, an industrial IoT specialised company, has been very fruitful thanks to STIMIO’s IoT expertise, its understanding of business challenges, the responsiveness of its teams and its ability to produce quality devices in volume.

Let’s talk about your use case!

May, 20th, 2020Rail temperature moniroting​ Extreme temperatures and rail transport do not get along too well In summer, under a blazing sun, rails tend to heat up quickly. It is common to see a rail temperature about 20 to 25°C higher than the atmospheric...

With an engineering background, Julien started his career as information systems consultant. After a MBA in Strategy and Finance at Audencia, in 2011 he joined the firm EY, where he supported his customers in structuring their development: strategic plan, business plan, improvement of financial performance and definition of internal processes. At STIMIO since early 2017, his mission is to structure and transform the company to accelerate its development.

Founder of STIMIO, David DORVAL has more than 25 years of experience in the semiconductor and electronics industry. He started his career in 1995 at TEXAS INSTRUMENTS as a test engineer before joining the French start-up DIBCOM in 2002 as VP OPERATIONS. His functions were continued within the PARROT group after the latter bought DIBCOM in 2011. The STIMIO project started in January 2016, and David has since built a solid team of nearly 30 highly qualified and multidisciplinary staff .

Engineer graduate of Centrale Paris and the IAE of NANTES, Raphaël first acquired a strong technical competence with 10 years of experience in the development of embedded software for real-time applications in advanced aeronautics. He then turned to the sale of high value-added services such as software engineering and electronic subcontracting. His knowledge of large industrial accounts as well as mid-size companies allow him to establish long-term and trustworthy relationships with Stimio’s customers.

Graduated from PolyTech Nantes, Gildas has been an embedded specialist for more than 10 years. With previous entrepreneurial experience, he joined  Stimio in March 2016 to lead the IoT team.